Latest From Our Blog

How to Use PEMF Therapy for Depression

Mental illness is very common in Australia, especially after two years of dealing with COVID and the flow effects of the pandemic. One in five (20%) Australians aged between 16-85 experience a varying degree of mental illness in any year. The most common mental illnesses are depression, anxiety and substance use disorder.

Clinical research has repeatedly demonstrated the effectiveness of pulsed electromagnetic field therapies on depression and anxiety sufferers as well as many other conditions affecting the brain with sleep improvement a common benefit. The Food & Drug Administration (FDA) in the USA has also approved PEMF for depression and anxiety disorder unresponsive to pharmaceuticals in 2006.

One double-blind study at Harvard Medical School conducted one clinical study, which found that a PEMF machine used in the study showed more than a 10% improvement in mood after just one 20-minute treatment in patients with bipolar disorder or with major depressive disorders. This study demonstrates the almost immediate benefits that pulsed electromagnetic field therapy can have on depression and anxiety for some people. Personally, I find that high-stress levels can have a negative effect or at least significantly slow down the recovery process when treating people with any kind of physical or mental disorder.

Another clinical study at one of the universities in the US found that after five weeks of active treatment with low-intensity, transcranial PEMF there was over a 60% reduction on the Depression Rating Scale for those in the group who were treated with PEMF. This study also found that improvement was evident within the first few weeks of therapy for many of the patients.

This may suggest that long-term, regular daily treatment, which can be easily achieved with a home PEMF low-intensity system could be beneficial for people who suffer from depression and anxiety. This would also produce minimal side effects without the high cost, time commitment and inconvenience required to receive other treatments in a professional’s clinic.

Another clinical study using low-intensity PEMF therapy in healthy women revealed that applying the low-intensity electromagnetic waves to two areas of the brain for just ten minutes created changes to the brainwave frequencies by lowering them. This may indicate that PEMF stimulation can possibly decrease the higher EEG frequencies commonly associated with anxiety, therefore making it effective in treating anxiety and stress disorders.

A wide body of additional research has demonstrated that low-intensity PEMF can be helpful in treating a range of anxiety disorders, from mild to quite severe, and not just exclusively for things such as sports performance for athletes.

I have been treating people with depression, anxiety and other brain-related imbalances for nearly five years along with many other kinds of physical ailments. I’ve seen many people with varying degrees of depression or anxiety respond to PEMF sessions, but it usually takes some time for the therapy to start to make a difference. Occasionally I’ve seen an immediate change in people, but that is the exception, not the rule.

In my way of thinking, there must be some kind of personal threshold of metabolic energy they need to surpass or at less retain for some length of time before the body can regain what I would call its internal mental balance. I liken it to the metaphor of changing a battery, but in this case, it’s the body’s cells. Just like a fully charged battery, the cells become more metabolic efficient and once they get to and are able to maintain a consistent metabolic level of charge, then this may open up, clear or connect the necessary pathways for better communication.

One person that comes to mind is Carl, who came to see me for depression. After about six or seven one-hour PEMF sessions, he felt enough internal change within himself to rent a system so he could do it at home and on a more consistent basis. Later he purchased a low-intensity full-body mat system with two other PEMF applicators. Upon checking with him after nine months, he told me his depression had faded away to little or nothing, plus his knee, which was scheduled for an operation, had healed on its own. He cancelled the operation he had been waiting for in the queue for years. I’ve seen many examples of people getting systems for one health issue and after some time other health issues have gradually melted away too. 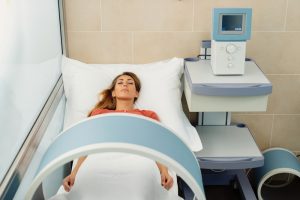 How Does Pemf Help Heal Depression And Anxiety?

Low-intensity PEMF therapy involves applying electromagnetic waves from the electromagnetic spectrum that replicates the natural frequencies of the earth to the body. These waves are often delivered by a full-body mat on which the patient lies along with small applicators that are used to focus on a smaller area of the body.

There are high-intensity transcranial PEMF systems on the market that deliver very strong magnetic fields thousands of times stronger than the earth’s natural magnetic field strength, some of which get very close to the field strengths of an MRI. Everyone leaves the room or is protected in an adjacent room when an MRI is going to be switched on. This is the same body of medicine that still uses Electroconvulsive treatment (ECT). The high-intensity systems are used more on horses than people.

Home Treatment With Pemf For Depression And Anxiety

As previously stated, depression and anxiety are complex conditions that may require long-term treatment. The safety and user-friendliness of low-intensity PEMF systems make it an ideal component to treatment for anxiety and depression. These machines are easy to administer and can be safely used on a daily basis, hopefully, a couple of times a day if rented or owned.

Sleep improvement, which is a commonly reported benefit also adds important benefits to the management of depression and anxiety.

I first treat the whole body to help establish systemic communication to the whole body. It’s very similar to opening up all the meridians in the body, which has also been proven and measured to be true. We start with the whole body because where a problem manifests may not be the only source of the problem. There may be an imbalance in a different part of the body like the gut or brain.

After treating the whole body for around ten minutes, I then use a smaller applicator called the Pad, which I place over the tummy (gut) for around fifteen minutes then follow the same procedure with the Pad to treat the head. I have found this to be a universal treatment protocol for depression and many types of autoimmune disorders like chronic fatigue and fibromyalgia.

How Can We Help with Anxiety & Depression

Low-intensity PEMF Systems have been shown to be safe and effective for the treatment of depression, anxiety disorders as well cognitive enhancement in healthy individuals.

It is an ideal component when combined with traditional treatments because it does not cause discomfort or side effects while still providing benefits such as increased alertness. Please click below to book a treat today!

Newer How PEMF Helps You Sleep
Back to list
Older What is PEMF?

Subscribe here for our latest news and promos straight to your inbox.