How PEMF Helps You Sleep

Recent research has revealed that a high proportion of Australians struggle with sleep. Approximately 60% of people report at least one symptom of a sleeping disorder occurring three or more times a week. Symptoms range from difficulty getting to sleep (insomnia), disrupted sleep (narcolepsy), waking too early, not being able to go back to sleep, snoring, restless leg syndrome, nightmares, teeth grinding and sleep apnoea.

Studies have also found that Australian adults experiencing significant problems with sleep rarely seek help. Sleep problems range across all demographics with no variations in prevalence by age or gender. But there were some differences experienced relating to age. Older people are more likely to repeatedly wake up during the night or early in the morning (47%), while younger people had more difficulty falling asleep (32%). This is where PEMF can help you out.

The three most commonly reported benefits people find after consistent use of PEMF over a period of time are:

1 – more energy, which often is described as also feeling ‘lighter’

3 – improved sleep in many of the symptoms listed earlier

I personally experienced sleep improvement, but really didn’t notice it until after a couple of months of using my PEMF system a couple of times a day. It’s a bit subtle when improvements of any kind sort of slowly melt away, which makes it kind of difficult to notice. Sort of like growing when you were a kid. You just don’t notice it but someone who hasn’t seen you for a while easily can.

What I eventually became aware of was less interrupted sleep. I used to get up or awaken two to three times a night. Now, I was sleeping through the night. The other thing I noticed was when I did wake up in the morning, the lights in my head were fully on. I was immediately fully awake – no brain fog or grogginess of sleep inertia. This carried with me all through the day.

Low intensity and low frequency, earth-based PEMF therapy has been shown to aid sleep. The low frequencies and intensities calm the brain by resonating with the brain’s own frequencies, sort of like a tuning fork. The brain will gradually match or entrain with the low frequencies of the PEMF system and literally slow down. This induces a positive calming effect somewhat analogous to meditating.

This is commonly referred to as brain entrainment, which is the synchronisation of the external PEMF waveform and frequency to the brain’s frequency. This is also known as resonance, which can create a state of coherence for the whole body. Swiss Bionic Solutions has recently introduced an integrated brain entrainment system (iMRS Prime Hybrid SET). This system generates low intensity and low-frequency PEMFs along with far-infrared plus a brain entrainment system using light and sound that matches the same frequencies of the PEMF system. In addition, there is also a sophisticated biofeedback system measuring HRV and blood oxygen content in the SET. 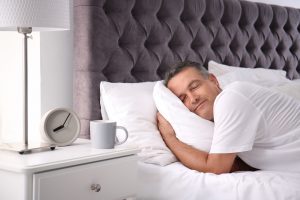 The iMRS Prime Hybrid generates four different frequencies based on the time of day through its built-in internal clock. The four frequencies are

The above frequencies can be manually changed to suit particular situations regardless of the time of day on all of the iMRS Prime systems.

Dr. William Pawluk, considered one of the leading authorities on PEMF in the US, says that whole-body PEMF systems may be used for sleep improvement but they aren’t as effective. I totally disagree. He contradicts himself by quoting research on sleep using low-intensity PEMF then turns around and advocates high-intensity systems that he sells.

What I like about whole-body systems with accompanying smaller more focused applicators that generate PEMFs is:

Yes, the reticular activating system (RAS), which is the part of the brain that controls levels of consciousness, wakefulness and sleep is located at the base of the brain. But with many disorders, the source of the problem may be due to imbalances in other parts of the body. With the brain, there is overwhelming evidence that the balance or lack of balance in the gut (microbiome) has a significant effect on the brain via the Vagus nerve. In fact, the gut sends nine times as many signals to the brain as the brain sends to the gut. For sleep improvement, the gut also needs to be treated.

PEMF systems have been shown to open up all the meridians of the body all at once. This establishes better communication for all systems within the body to help restore its natural balance. The small applicators can be used to focus on the head too.

I personally would suggest ten minutes on the whole body mat followed by the Pad on the tummy (gut) for 15 minutes followed by the Pad behind the head for 15 minutes to help improve sleep.  You don’t have to run a system while you are sleeping. A PEMF treatment, just like charging a battery, will last four to six hours but you will also have the inertia and benefit of this charge that can last long after even the four to six hours.

If you would like to discuss PEMF in regards to your own personal health concerns, then please give me a call or book a free 15-30 minute consultation at www.pemf.com.au, or please click below to book a treat today!

CALL TO FIND A PEMF PRACTITIONER IN YOUR AREA

Send an email with your questions
info@pemf.com.au